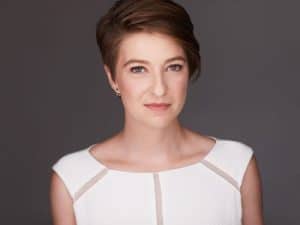 Praised as “a fine actress with a deep, spacious sound” [Parterre], American mezzo-soprano Kristin Gornstein brings her “rich-voiced mezzo-soprano” and “lines of an uncannily silky legato” [New York Times] to her work, ranging from the traditional to the edgy and imaginative. She was lauded for her recent portrayal of Ramiro in Mozart’s La finta giardiniera in a co-production by On Site Opera and Atlanta Opera, a role she reprised in 2018 at Caramoor. The 2017/18 season also brought debuts with The Prototype Festival (Aquanetta), and the Little Opera Theatre of New York as Piramo in Johan Hasse’s baroque gem Piramo e Tisbe.

Kristin made her Carnegie Hall debut in the Spring of 2018, winning third place in the international Lyndon Woodside Oratorio Competition. Upcoming engagements include solo appearances with Sacred Music in a Sacred Space in NYC, the Brooklyn Art Song Society, and the Princeton Festival in Princeton, NJ. A Michigan City native, Kristin grew up singing in the choirs of the First Presbyterian Church, as well as in choirs and musicals at MCHS. She went on to earn a Bachelor in Music Performance from Butler University, and a Master of Music Performance from the University of Colorado, Boulder. Kristin looks forward to returning home to the First Presbyterian Church for this fantastic community event every year!