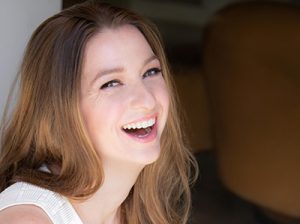 Praised as “a fine actress with a deep, spacious sound” [Parterre], American mezzo-soprano Kristin Gornstein brings her “rich-voiced mezzo-soprano” and “lines of an uncannily silky legato” [New York Times] to her work, ranging from the traditional to the edgy and imaginative. She was lauded for her recent portrayal of Piramo in Johan Hasse’s baroque gem Piramo e Tisbe with The Little Opera Theatre of New York, with Opera News calling her performance, “…masterful.  She sang the difficult role with a truly flawless lyric mezzo”. This fall she enjoyed her Lincoln Center debut in the role of Wang Sheng in the China Now Music Festival’s production of Painted Skin, and future performances include Mars in La Púrpura de la Rosa with the Baroque Chamber Orchestra of Colorado, and the title role in Dido and Aeneas with Opera Fort Collins.

Kristin made her Carnegie Hall debut in the Spring of 2018, winning third place in the Lyndon Woodside Oratorio Competition.  She has joined Sacred Music in a Sacred Space as alto soloist for both Vivaldi’s Gloria and a program of Domenico Zipoli’s work titled Zipoli and his World, the New York Wind Symphony for de Meij’s 4th Symphony, Sinfonietta Riverdale as Bessie in Weill’s Mahagonny Songspiel, and the American University of Beirut as soloist in Handel’s Messiah and Mozart’s Mass in C Minor. Kristin toured with Mark Morris Dance Company’s acclaimed production of Purcell’s Dido and Aeneas as an ensemble member, appeared at Lincoln Center with the New York Philharmonic for Honegger’s Jean D’Arc au Bûcher, and has made numerous appearances in recital at Caramoor. This year marks her ninth performance with the Michigan City Messiah as alto soloist.  She is very grateful to have the opportunity to come home each year to do so!