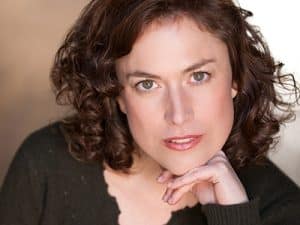 Kirsten Leslie Karadzhova has performed nationally and internationally as both singer and actress.  Her repertoire is quite diverse and includes roles in opera & operetta such as Gilda in Rigoletto and Rosalinde in Die Fledermaus; contemporary opera such as the “Flier” (Amelia Earhart) in Daron Hagen’s Amelia and Orquidea in Daniel Catan’s Salsipuedes; musical theatre such as Anne in A Little Night Music, Maria in West Side Story, Magnolia in Showboat and Carrie in Carousel; and straight theatre such as Imogen in Shakespeare’s Cymbeline.

She gave her Carnegie Hall debut singing Mozart’s Exultate Jubilate, Vivaldi’s Gloria and John Rutter’s Magnificat conducted by the composer. She was asked to sing with Maestro Rutter once again at Carnegie Hall in the Messiah and his Magnificat.  Miss Leslie soloed in a Carnegie Hall premiere performance of Rossini’s Ermione with well-known tenors, Barry Banks and Bruce Ford.

Her extensive background in musical theatre includes such leads as Maria in West Side Story with Hunter Foster (Tony nominee) as Tony; Magnolia in Showboat with Michael Lackey as Ravenal; Luisa in the Fantastiks, and Young Sally in Sondheim’s Follies and much more.

While employed with the Colonial Williamsburg Foundation, Miss Leslie developed the character of “Nancy Hallam”, an actual 18th century “triple threat” – singer/dancer/actor (and harpsichordist too).  She was featured on the cover of the Colonial Williamsburg Journal along with an article about her research of Miss Hallam.  She also was leading lady in several 18th century plays including Steele’s The Tender Husband, Ryder’s The Provoked Wife and Rowe’s The Tragedy of Jane Shore.

She was “Artist in Residence” at Middlebury College’s prestigious Intensive Italian and German Study Programs.  She received a scholarship to study at the University of Florence in Italy where she was “Visiting Artist”.  Performing in Italy often, she won the “Padre Pio Sacred Music Competition” in San Giovanni Rotondo, Puglia.

A member of Actor’s Equity Association as well as SAG and AGMA, Miss Leslie played Anabella in the musical production of A Christmas Carol at Westport Playhouse (Connecticut) directed by Tazewell Thompson, famed stage director for various productions of theatre and opera around the world including the New York City Opera and Opera Bastille in Paris.

Ms. Leslie was a Metropolitan Opera Competition District Winner; and has toured as a soloist throughout Italy, Holland, Austria, Germany and the Czech Republic.  She has a Master’s in Vocal Pedagogy and Performance from the Moores School of Music at the University of Houston and a BFA in Musical Theatre Performance from the University of Michigan.  Currently she is an international freelance artist and teaches private voice and piano in her home and at Buffalo Grove High School.

In addition to singing with the professional soprano trio, Tres Belle with Kim Jones and Marisa Buchheit, Ms. Leslie also sings and plays piano in a duo with her sister, Regina Leslie called the Leslie Sister Duo.  She founded the Quarantine Quartet during the pandemic; Kimberly Jones, Aaron Wardell, Cornelius Johnson and herself.  Having lived and performed abroad, she is conversational in both Italian and German and is currently studying Bulgarian. You can read more about Ms. Leslie and listen to sound clips on her website