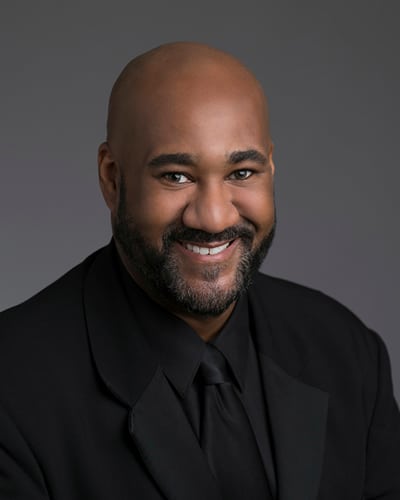 With more than forty operatic roles to his credit, baritone Bill McMurray has been described as “a baritone with warm, rich tones and superb stage presence” by the Durham Herald Sun. Such roles include “Figaro” in Il baribiere di Sivigila, “Count Almaviva” in Le nozze di Figaro and “Escamillo” in Carmen. Walter Marini of the New Buffalo Times is quoted as saying his portrayal of “Marcello” in Puccini’s La Boheme is “a powerful actor who brings great elegance to the role. His singing is as fine as anything being heard in major opera houses today.”  Recent engagements include his first major Russian role as “Ibn Hakia” in Tchaikovsky’s opera Iolanta with Chicago Opera Theater. He debuted with the Illinois Philharmonic as the bass soloist in Handel’s Messiah, then returned to Chicago Opera Theater this past winter for the Midwest premiere of Stefan Weisman’s opera The Scarlet Ibis. He concluded his 2018-19 solo season with the symphony orchestra at the University of Chicago as the baritone soloist in Michael Tippett’s oratorio A Child of Our Time, conducted by Barbara Schubert.

Highlights of his 2019-20 season has Bill singing his first baritone solo in Beethoven’s Ninth Symphony with the Northwest Indiana Symphony, as well as the role of “Riff” in a concert version of West Side Story with the same orchestra later this season. He will make his debut with Opera San Antonio in the role of “Marullo” in the opera Rigoletto in the Spring of 2020.

Previous engagements include his first “Germont” in Verdi’s La Traviata with Harbor County Opera in Three Oaks, Michigan. Additionally, in 2018 he sang the role of “Mr Greatorex” with Chicago Opera Theater in the world premiere opera Elizabeth Cree, then returned to Summer Garden Opera in Virginia to reprise his signature role of “Figaro” in Il Barbiere di Siviglia. Bill sang the lead role of “Prospero” in Lee Hoiby’s The Tempest with Longleaf Opera in NC, while the composer himself was in attendance and received outstanding reviews for his performance. He has sung with noted companies like Florida Grand Opera, Opera North, Knoxville Opera, The Opera Company of NC, Mobile Opera, Opera Carolina, Central City Opera and Opera on the James. Mr. McMurray has also performed several times with the Lyric Opera of Chicago’s “Opera in the Neighborhoods” and “Meet the Artist” outreach programs. In 2013 Bill sang the lead role in the Chicago premiere of Der Kaisser von Atlantis at the Jay Pritzker Pavilion with the New Millennium Orchestra under the baton of Francesco Milioto.

Equally successful on the concert stage, Bill has sung solos in such oratorios as Handel’s Messiah, which he recorded on CD, and Mendelssohn’s Elijah, as well as works such as Vaughan Williams’ Five Mystical Songs, and the Faure Requiem. Concert appearances include the New Philharmonic Orchestra in Glen Ellyn, the Elmhurst Orchestra and Choral Society, Fayetteville Symphony Orchestra, Chicago Symphony Orchestra, Skokie Valley Symphony, Chicago Arts Orchestra, New Millennium Orchestra and the Waukegan Symphony. He performed a set of Aaron Copland’s Old American Songs with The Chicago Civic Orchestra and was the baritone soloist in a concert version of Porgy and Bess with Northwest Indiana Symphony.  Mr McMurray was also a featured soloist in Florence and Rome, Italy with the combined choirs of St John Cantius Church and St Joseph College. In the summer of 2017, at the Ravinia Festival, he was the bass soloist in the final movement of Haydn’s The Creation, conducted by former Metropolitan Opera Music Director, James Levine. He is a previous first place winner of the National Association Teachers of Singing competition and was one of eight singers selected to the Winners Circle of The Classical Music Vocal Competition, which was held in Chicago.